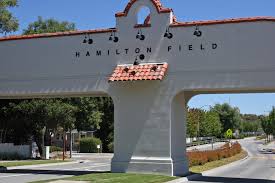 It has a very colorful and memorable history. I wanted to share some of that with my readers. The two links that I have included covers much of the history and also has numerous pictures of the facilities and the whole Air Force Base.

I was stationed at Hamilton Field California in 1959 and part of 1960 assigned to a aircraft maintenance squadron. The F-89 was being phased out and the F-101A and B were replacing it. I finished high school there, attending night classes in 1959. I graduated from San Rafael High School, 2 years after my graduating class at Castlewood High School in Castlewood South Dakota.

Hamilton field was right on the north side of the San Francisco Bay Area. The highest cost of living anywhere in the United States. A tough assignment for low paid service members. As I recall one fellow had his wife come out to live with him, they had to live an hour’s drive away from the base in order to find affordable housing.

One good friend of mine, Don Esler from Minnesota was one of the few airmen in our squadron who had his own vehicle. We were all young fellows just out of basic training and Technical School. Aircraft maintenance at Amarillo, Air Force Base, Texas. Hamilton field was our first assignment after getting out of School. In 1960, Don went to the Netherlands and I went to Japan.

I think we took advantage of Don’s generosity about driving us different places with his vehicle. He was very good about driving me a hundred miles to the City of Woodland to visit relatives. One weekend four of us went to Lake Tahoe, we were somewhat shocked at the prices there, we ended up staying in a small tent campground. We had our  BIG weekend at the one and only Lake Tahoe resort area.

The runway at Hamilton field was below sea level, dikes kept the seawater off the runway. I believe it was 1959 when an earthquake in South America sent a title wave up the coast, that big wave went underneath the Golden Gate Bridge and manage to go over the dikes flooding the runway. That hampered flights in and out of the air base for a few days, until the water was pumped out.

I recall one time we had a hot dog pilot fly an F-104 underneath the Golden Gate Bridge. That would be a very hard thing to do without being noticed, it didn’t take very long to track him down and I would imagine he was reprimanded quite severely.

The F-101B was a fighter aircraft with two seats, the Radar Observer rode in the rear seat. These planes were brand new at Hamilton field in 1959. There was an incident where one plane was doing maneuvers out over the ocean and the canopy inadvertently blew off. The Radar Observer must have thought the pilot ejected from the plane, so he ejected. I don’t believe his body was ever recovered, it was a tragic thing, an accident no doubt caused in part by a new airplane that the pilots were not completely familiar with.

Highway 101 was the main highway out in front of the base, it had what they call a suicide lane. It was a heavily traveled highway, but you passed someone using the center lane when it was clear. There were many head-on collisions. We did take that road into San Francisco quite often as there was a regular shuttle bus service into the city.