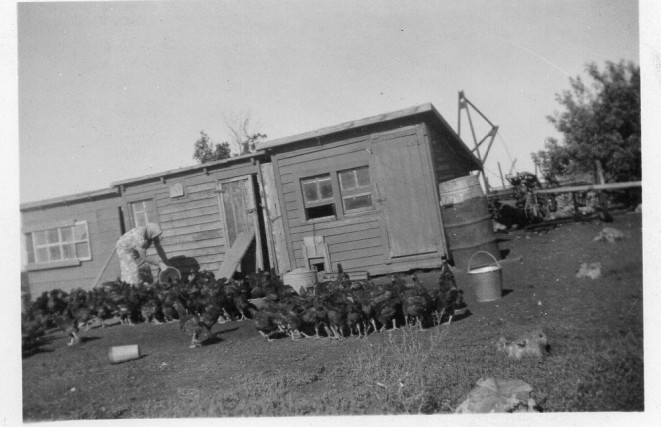 Grandmother and her famous Chickens 1918

A Tribute to Grandmothers

The families having become acquainted in Michigan later moved to Northern Minnesota to the iron mining region near Bovey Minnesota. My grandparents were married in the little town of Bovey in 1912. Their wedding picture was taken in the small Studio where the world famous picture Grace originated.

A daughter Alice was born to them in 1913. Alice was the type of person who spent her whole life influencing people like Mother Teresa, setting an example for them to work around.

My father Frank was born in 1913. He was a stern, no-nonsense man. He could be meaner than a junkyard dog one day, thoughtful and considerate the next. Local Ministers that went to visit him later in his life must have considered, ‘WHAT IF’ thoughts of mission work with the Headhunters in New Guinea. They would have found a more peaceful welcome there no doubt.

Elma was born to the Olson’s in 1916 like her mother she never had a bad thing to say about anyone. She would not tolerate foul language. I was one grandchild who quickly learned soap was for other things besides taking a bath with. A tiny, little taste of soap removes foul language from the tip of the tongue relatively quickly.

My grandparents came to South Dakota shortly after Alice was born in 1913 and they rented a small farm. They began their lives together as Prairie farmers. Poverty to them probably didn’t mean much, everyone was poor, so what, happy and content is like gold in your vault. Grandmother raised her famous State Fair ribbon-winning Road Island Red chickens. It seemed like those roosters were three feet tall! They sold eggs or traded them for groceries at the store in town. There was always a few milk cows that they had for their own milk and if there was extra cream that was sold in town along with the eggs. Hogs were raised and sold at the butcher shop or the Livestock Sales Barn where they were taken to a meat packing plant.

My grandmother was a farmer’s wife. Many grandmothers during the World Wars worked in aircraft factories or shipyards along side of the men. Many joined the military and were in uniform. A grandmother no matter where she worked or what her title was, she was a grandmother, and always had a hug for her grandchildren. A hug and a kiss, a feeling of protection and safety that only a grandmother can give. That unconditional love is the closest thing to God’s Agape love. My brother Harlan and I broke some of her watermelons one time trying to find a ripe one. I can’t believe I’m confessing to this heinous crime because it deserves capital punishment. That has got to be a true sign of unconditional love. She should have banished us to stay in our house until we grew up.

Grandmother’s get a bad rap for spoiling kids. I wonder why it is the kids behave better after they’ve spend a few days with Grandmother at her house? It must have something to do with she makes them mind with hugs, love, and forgiveness.

Grandmothers should get much of the credit for keeping church’s alive in America. It is sad to say if the job would have been left totally up to the men the church would not be nearly as strong as it is today. My grandmother and my aunt Alice made sure we kids went to church. Alice became my mother in my formative teenage years.

If attending church for our family had been left up to my dad I doubt if we would have found the door to one. Dad viewed religion a lot like Woody Guthrie who said, “people go to church and sing “Stand Up for Jesus,” then they go to the ball game in the afternoon and say “For Christ Sake Sit Down.” That seemed to be my dad’s sentiments on religion. I always found that analogy more than a wee bit misrepresented.