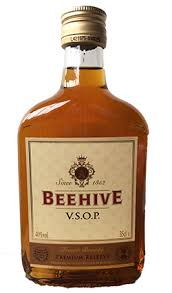 Partake of the Elixir

I had a deep desire to partake of the secret elixir. I watched my grandfather from a distance as he proceeded to the old nail keg out in his workshop. From my Hiding Place in a far shadowy corner I watch him lift an empty burlap bag from an old nail keg. I then suspected beneath that potato sack was his precious elixir that I had heard him tell a friend about in the past. He took a sip, shook his head from side to side, then took a large drink. He related to his friend it was heart medicine. It actually was a very strong brandy not a sweet flavored variety, not the tasty flavored variety that I found later on in my life.

I was 6 years old at the time much too young to partake of heart medication of that strength. I loved my grandfather and I thought if it was a good thing for him to drink it must be all right for me too. After he went about his business doing farm chores I decided to partake of my sample of the elixir in the little brown bottle. I followed his leading and took a little sip, I was ashamed as I tried to spit it out, it was very bitter. I must have swallow some of it. Most of that day became very foggy for me and I wasn’t walking real straight.

This was in 1946 as polio was running rampant through our neighborhood, almost every family had someone with polio. My grandmother suspected that was what was wrong with me. She never got a good whiff of my breath evidently. I went to bed and rested, she came and checked on me many times during the day. Evidently wondering what caused by body to start malfunctioning like that. I’m sure if she had known what happened grandfather would not have been spoken to for a long while. She hated strong drink. I sat at the table with them to partake of the evening meal and everything seemed to be going fine.