Tenterhooks are hooks in a device called a tenter. Tenters were originally large wooden frames which were used as far back as the 14th century in the process of making woolen cloth.

The idea possibly came from memories of early tribesman. After they moved out of caves a new need for shelter arose. With mans first tools they cut wooden poles, bound the ends together with rawhide, then tied skins of large animals to the frame of poles. That was probably the original tenterhooks. made of rawhide and wood.

A smaller tent was made for smoking meat. The meat was hung on hooks similar to tenterhooks and slowly dried to keep it from spoiling. This was the first jerky meat eaten by man.

Early man knew he could not live on meat alone. So he used a frame with hooks to hang up his fish to dry in the hot sun. They might have hundreds of salmon hanging for many hot summer weeks in the broiling sun, and dry it to the point it would keep all year. Most tribes used a wooden frame with tenterhooks as the wool industry used centuries later.

If a young couple is expecting to have their first child but didn’t have a sonogram done in advance to determine the sex of that new baby. The expectant father will no doubt find himself sitting on tenterhooks during those long hours preceding the child’s birth.

Millions of animal hides have been dried throughout the centuries by simply tacking them onto the wall of a shed or old barn. As in the song; Tie Me Kangaroo Down Sport. So they tanned his hide when he died Clyde and that’s it hanging on the shed. Kangaroo 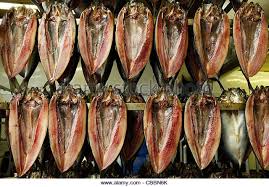