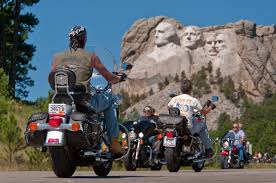 “The Sturgis Motorcycle Rally is an American motorcycle rally held annually in Sturgis, South Dakota, for ten days usually during the first full week of August. In 2015 the city of Sturgis officialy expanded the dates to have the Rally, start on the Friday before the first full week of August, to end on the second Sunday. It was begun in 1938 by a group of Indian Motorcycle riders and was originally held for stunts and races. Attendance has historically been around one half million people, reaching a high of over 700,000 in 2015, and generating around $800 million in revenue.” Rally

The link below has many more pictures.