You can spike or stake orchids to keep them from tipping,, you could do the same with many other garden plants to keep them upright and from being damaged from lying on the ground.

“The punji stick or punji stake is a type of booby-trapped stake. It is simply a spike made out of wood or bamboo, generally placed upright in the ground.”

The Boy and The Bear

I’m going to write about a stake that you use to stake out a milk cow, so she has fresh grass to eat, to maintain the milk supply for you and your family. In the days of the American Frontier up until fences were used to keep cows from roaming away, it was usually the job of the older children to watch or stake out the milk cow or milk cows if they had more than one.

A lot of times they packed a lunch and stayed with the cows all day if they were staked out a long distance from the barn because the grass was better. There were many times when water also had to be carried to the cow. If the cow was staked close to the house, it would be milked where it was at. Someone on a stool, bucket between the legs, milking a cow was a common sight at one time.

An 11-year-old lad was once asked by his father, “Take the old milk cow down near the creek where she can have water, that you don’t have to carry, the grass is real good in several places there.” They had to go through the woods to get to the creek. The boy’s father told him, “take the .30- 30 Winchester rifle along just in case a bear might show up.” His dad told him, “The Bears are still up in the High Country so there shouldn’t be any problem if one shows up shoot a couple shots into the air to scare it away.’ The boy obediently took off with his cow following on a rope that was already tied to a stake over one shoulder. He had his lunch over the shoulder he was carrying the rifle on.

In mid-afternoon, the boy half dozing, thought he heard some noise coming through the woods. He thought it might be his sister bringing some cookies or cake.When he looked up there was a big ferocious looking bear coming right toward him and the cow. There was no time to shoot into the air, the bear was almost on top of him. 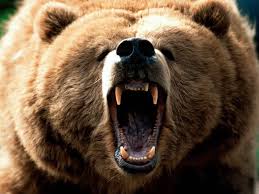 At age 11, he did not panic or hesitate, he shot the bear right between the eyes as it was almost on top of him. The big old bear rolled over dead, but he shot it through the heart to be sure. The boy shaking, quickly headed for home, leading the cow at a very brisk pace. As he walked up to the house his dad came out and asked, “Why he was home so early.” “I just killed a big bear, “looks like we’re going to have some bear meat to eat.” The young lad grew up real quick.