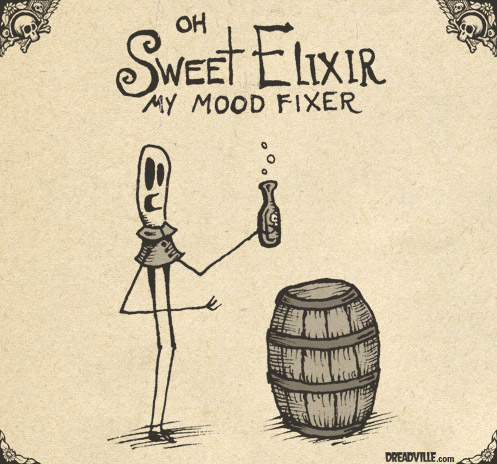 Elixirs have fascinated the people  for hundreds of years.  Adventurers and explorers have sailed all the seas of the world, searched every country looking for the Fountain of Youth or an elixir that could provide eternal life. Early experiments with elixirs laid the groundwork for our modern-day Pharmaceutical industries.  Alchemists  were even in search of an elixir that could turn lead into gold. To the glee and greed of many, this elixir would have been in high demand.

I recall as a child my grandmother had a very special elixir for coughs, colds or sore throats. She mixed pine tar with honey, the pine tar got your attention, right now. The honey, ‘like the spoon full of sugar’ made the medicine go down. It warmed the throat instantly, soreness soon vanished, it was a very good cure.  Another memorable elixir from our youth.

My grandfather had his own elixir, it wasn’t a very sweet elixir, to him it was his heart medicine, taken in small doses to keep his heart healthy. Grandpa being a loving husband, evidently didn’t want to bother our grandmother with his elixir taking. So not to upset grandmother he would keep his elixir in an old nail keg out in the barn. This was a very safe place to store his elixir, where he could find it and use it as needed.

I recall back in 1945 or 1946 my cousin Sandra and I was staying with Grandma and Grandpa during Harvest Time. Grandmother must have been busy preparing dinner for those working in the field. My cousin Sandra and I loved our grandfather dearly. We followed him everywhere and tried to imitate things that he did, typical, young, loving grandchildren.

One day we followed grandpa at a distance and watched him go into the barn. We peeked around the corner, He was taking a burlap sack out of an old nail keg, then he took a bottle from the keg and took a couple drinks from it. We watched Grandpa take a couple sips of his ‘brandy’ elixir, then he put the bottle back in the nail keg and covered it with the burlap bag.

After he left, Sandra and I proceeded straight to the nail keg. We saw that He enjoyed his elixir treatment so we thought we had to try it too. We got out Grandpa’s special bottle and we tried some, it was not sweet, it was quite bitter and strong. I believe each one of us took another sip following our Grandfather’s motions. The rest of the day got to be a little fuzzy for me. I do recall it was Harvest Time and someone took me and Sandra out to the grain field where they were shocking grain. I was only five or six years old but I do recall part of the conversation grandpa had with my father.

It was grandfather’s suggestion they keep us two kids out in the field, out of sight from Grandmother. The way the conversation went, they were quite positive that grandmother would be very upset. We spent the hot afternoon in the field, they tried to keep us in the shade and no doubt out of site be putting us in a grain shock. I believe we did sleep away a good share of the day. That is one experience I will carry with me for the rest of my life. My first hangover at age six!