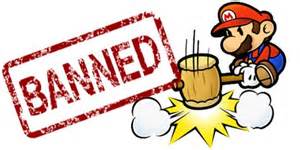 There was a time in this country when a quiet little lady could walk into a pub or bar to have a chat with the bartender. While they talked, the bartender kept nodding his head in the affirmative. After she leaves, someone asked the bartender, “What was that all about?” She just had her husband banned, ‘ black balled’ from this bar. The fellow asks the bartender, “You mean you’re not going to serve him any more drinks? The bartender answers him, ” I think he will be banned until he makes some changes in his life, considering his family first.”

This story sounds like it could be probable, not likely possible, in the times were living in today. Back in the days of prohibition, in a speakeasy bar, it probably would have carried a lot of weight, the bartender would’ve gladly complied with the ladies request, banning her husband from being served. The alternative was being raided and shut down.

The list of everything that has been banned in the last few decades goes on and on and on, it is a very long list. Gas stoves with pilot lights. Riding lawn mowers without a safety switch to shut the engine off without a rider on the seat. Banning weed killers and insecticides used on your garden. Driving without a seatbelt is banned.

Many different drugs are banned while marijuana is becoming legalized. Banning some artificial sweeteners. Banning salt limits in many products. Banning fat content in canned goods. Banning books, certain movies and putting them on a rating list. Banning certain chemicals from being fed to animals and poultry. Banning genetically altered seed in many countries. Banned baby car seats, diapers, cribs, bottles, pacifiers, formula and baby food. Tricycle bans are planned for when they get older.

We have OSHA, the Occupational Safety and Health Administration to thank for most of these banned things. They have big offices and a big budget in Washington DC.  It is their goal to protect the consumer, from himself at all costs. So most everything that we come across in our daily lives that has been banned, or the hundreds that are in the process of being banned. We can give thanks to OSHA for being there, at their jobs, doing their work diligently.

My favorite banned thing has to be lids on prescription drugs, safety caps will certainly keep children out of the pill bottles and also the grandparents, except the grandpa who still has a hack saw.