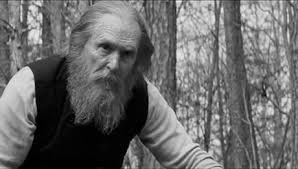 There was a lake near our place named Lake Albert, it was approximately 3500 acres in size. There was an island approximately one mile off the south shore of the lake. An old hermit lived on that island over a 100 years ago. He made a little dugout house, into a hillside with a stonewall and the door facing the south. I was always very fascinated with the stories about the hermit who lived on the island and only came to town a few times a year. I liked to explore there as a youth. No one seemed to know his name, he got stuck with the nickname Coyote. A large number of coyotes inhabited the island, they had many dens dug into the small cliffs and hillsides. The old hermit had a mysterious bond with his pack of coyotes, no doubt why he got the nickname.

The old fellow didn’t require much for supplies. He had to be a very tough, savvy, survivor, living on fish and birds he could catch or shoot on the island. The fish were very plentiful, that no doubt made up the biggest share this diet. The old fellow must have had his own gill net, which was a guarantee to have fresh fish. If the game warden didn’t catch you.

When he did come to town he would buy lots of salt, a little sugar. Rolled oats and flour would have been used sparingly. When he had money from trapping he no doubt bought a chunk of bacon or two because it would keep for a long time when it was smoked almost until becoming dry. The old fellow dried his own meat and made jerky Indian style. Salted fish would have been in a crock all the time. He had what was necessary to maintain a fairly healthy diet.

In the early years there was evidence of land being farmed and a small garden spot, so he also bought some garden seed to get him started, then saved his seeds. He no doubt had dried beans and some potatoes and carrots for winter. He had fresh vegetables during the summer months when they would grow. The garden was located very close to the water so when conditions were real dry he could carry water from the lake up to his garden.

In my younger days I decided I was going to go deer hunting on the Hermit’s Island one time. The lake was frozen so I walked across the ice to get out to the island. I hadn’t been there for many years, so I did a little more exploring. There wasn’t much left to see, the weather and time and pretty well destroyed everything that he left behind. Part of the stonewall was still standing and what was part of the window was still there. Freezing rain started falling while I was there so I stepped into the edge of his little dugout house, the walls were caved in further inside. I planned to sit there and wait for the storm clouds to blow over, a very strong northwest wind was howling.

I was out of the weather and had a dry place to sit down, sort of dozing off with thoughts about old Coyote. No one ever knew his name. A hermit probably likes it that way. I wondered if he had a family who knew where he was, or cared. He had about as plain a life as anyone could ever imagine. He never saw electric lights except in town, he probably did have a kerosene lamp, but rarely used it because he would’ve had to haul kerosene too. He slept when the sun went down and woke up when the sun came back up. He didn’t have many chores to do except for a few chickens and a milk cow at one time. He trapped around the whole lake during the trapping season, that was a fairly good way to earn extra income.

As I dozed off thinking about the hermit, I realized I envied his life style to a point.  He just up and disappeared one day. There was some talk about him going back East. Several different stories spread around the neighborhood for a short time. One story was very grizzly, the idea that his friendly pack of coyotes had turned on him and ended his life right there on his peaceful little island.

I thought I could hear noises, something other than the wind. It sounded like wheezing noises coming from the back of the dugout, like someone was having a terrible time breathing back there. Did he die back there? That is where he would have slept. I listened as the noise grew fainter like labored breathing, then stopped. I thought to myself, I might be about to meet the ghost of Hermit Island.

Is he coming out to greet me and welcome me? Either that or scare the crap out of me and hope I fall through the ice as I run back toward shore. It was close to getting dark, I thought I surely don’t want to shoot a deer out here now and have to drag it close to a mile back to the road. So I started my trip back toward shore, all the while looking over my shoulder, to see if there was somebody behind me. The coyotes all started to howl. “The hair stood straight up on the back of my neck.” I remember running the rest of the way back to shore.” I believe the old hermit stayed right in his dugout, out of the weather, listening to his coyotes and laughing at me.

One thought on “Hermit Island”