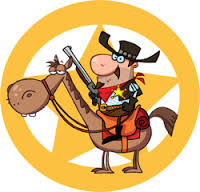 The sheriff nonchalantly strolled out of the saloon, dropping his cigarette butt, just as the rowdy stranger was dismounting his lathered steed and tying it to the hitching rail.

The sheriff said, “You are a horse thief and a cattle rustler, drop your gun or I’ll drop you where you stand.”

The wise old outlaw dropped his drawers to shock the sheriff, then shot him dead.

The rowdy old rustler stepped over the sheriff’s body to everyone’s awe, went into the saloon and had a few shots of whiskey, never spilled a drop.

One thought on “Shock and Awe”