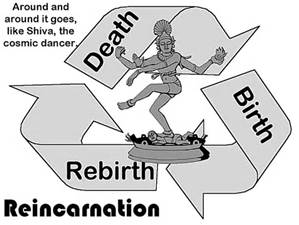 DAILY PROMPT
Karma Chameleon
Reincarnation: do you believe in it?

“If you believe in reincarnation, you believe that after death a person’s soul is reborn in another body. Certain religions hold this belief as a central tenet, including Hinduism and Buddhism.”

“The Hindu or Buddhist doctrine that a person may be reborn successively into one of five classes of living beings (god or human or animal or hungry ghost or denizen of Hell) depending on the person’s own actions” This sounds like very good reasons to live a decent life, with being reincarnated as denizen from Hell being a possibility“.

The Hindu and Buddhists believe this, it is their doctrine, their belief and I’m not the one to say anything against it. It has been their belief since the beginning of their religion. I would imagine if I was of that faith my mother-in-law would be watching to see if I came back as a dog. Biting my mother-in-law on the leg would happen sooner or later.

The Christian Bible tells us after we die our soul goes to heaven. There is a time when the soul will get a new body. If the soul is properly accepted into Heaven it will get a new body. When you think about the idea of our earthly bodies, full of pain, cancer, heart disease, lungs all worn out and so many different things. The idea of having a new body sound very exciting. I guess I will go along with believing in reincarnation if that includes trading in my old earthly body on a new heavenly body. As I once said, “when I have my new Heavenly body and there is a golf course in heaven, there should be one, if it is Heaven, I will be playing golf every day, rain or shine.”