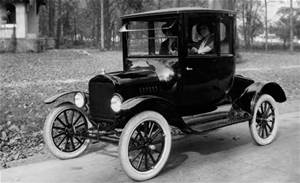 Henry Ford was one of America’s most colorful and ambitious industrialists. He was born on July 30, 1863 at Spring Wells Michigan, he died on April 7, 1947 in Dearborn Michigan. He was the founder of Ford Motor Company. The Ford Trimotor was an American three-engine transport aircraft that was first produced in 1925 by the companies of Henry Ford and that continued to be produced until June 7, 1933. Wikipedia

In 1919, Ford purchased The Dearborn Independent, then an obscure newspaper published in Michigan City, that was the headquarters of his automobile company. For the next eight years, the weekly publication reflected his bigoted views.
One of the paper’s chief targets was the so-called “International Jew,” a sinister figure cited as the root cause of World War I. Henry Ford was Anti-Semitic.

Ford brought suit against the Chicago Tribune in 1919. Ford sued the Tribune for libel after the paper called him an “ignorant idealist … and an anarchist enemy of the nation.” Newspapers from across the country covered the trial in breathless detail as Ford was subjected to eight days of questioning. Though Ford won the trial, the press ridiculed the automaker for his lack of historical knowledge and inarticulate performance on the witness stand.

It has been said, “that trial prompted Henry Ford to build the Ford museum and Greenfield Village.” He would show the world, “he cared about history and his country.” The Henry Ford is a large indoor and outdoor history museum complex and a National Historic Landmark in the Metro Detroit suburb of Dearborn

Entering Greenfield Village is like stepping into an 80-acre time machine. It takes you back to the sights, sounds and sensations of America’s past. There are 83 authentic, historic structures, from Noah Webster’s home, where he wrote the first American dictionary, to Thomas Edison’s Menlo Park laboratory, to the courthouse where Abraham Lincoln practiced law. The buildings and the things to see are only the beginning. There’s the fun stuff, too. In Greenfield Village, you can ride in a genuine Model T or “pull” glass with world-class artisans; you can watch 1867 baseball or ride a train with a 19th-century steam engine. It’s a place where you can choose your lunch from an 1850’s menu or spend a quiet moment pondering the home and workshop where the Wright brothers invented the airplane. Greenfield Village is a celebration of people — people whose unbridled optimism came to define modern-day America.

Between 1903 and the 1908 advent of the Model T, Ford’s company manufactured nine different cars: Models A, B, AC, C, F, K, N, R, and S. The most successful, the Model N, is described in advertisements as “a high-grade, practical automobile…[raised] out of the list of luxuries.” Its skyrocketing sales foreshadow the success of the Model T

Henry Ford was the epitome of the American Dream. He was born in to a farm family that was relatively poor, he was born a tinker. Took a pocket watch apart and put it back together at the age of fifteen. He worked his way up through various jobs before getting himself more education and continually advancing himself one step at a time. His one weak spot, being Anti-Semitic, that was very popular in the Hitler era.

One thought on “Henry Ford”